The Andorians were a blue-skinned species from Andoria, and one of the founding members of the United Federation of Planets. One of their most recognized physical features were their antennae and white hair. (Star Trek: The Original Series)

The original Andorian homeworld is the natural satellite Andoria, which orbits a gas giant in the Procyon, or Alpha Canis Minoris, system. Andoria's surface is icy and rarely, if ever, thaws. (Star Trek: Enterprise)

Andorians had a secondary osmotic circulatory system; this enabled them to perfuse more efficiently, making them less prone to fatigue and extremes of temperature but also more susceptible to poison. (Among The Clans)

Even being grazed by a beam weapon could result in a potentially fatal phase-pulse infection.

Dr. Yungchen Tsering of the USS Monitor compared the pathogenesis of this condition to secondary infections common among humans, such as necrotizing fasciitis and sepsis. A survivor of a phase-pulse infection might suffer nerve and tissue damage requiring extensive tissue debridement and/or amputation of the injured limb, with an extended convalescence and period of rehabilitation. (Eighth Fleet RPG)

Some Andorians were lactose intolerant due to not metabolizing the proteins in Terran cows' milk. (Eighth Fleet RPG)

The Aenar are a sub-species who are white-skinned, blind, and telepathic.

The suggestion in Starfleet Medical Reference Manual (Ballantine, 1977) that Andorians have a partial exoskeleton has no support in canon, although an Andorian so endowed was illustrated in "The Dragons of Berengaria: Part Two" by Brian Franczak in Enterprise Incidents #8, 1980. On the other hand, the Manual also suggested Andorians don't have ears, which has since been contradicted.

They sense fluctuations in gravity, useful for beings living underground on a geologically unstable world. Extreme gravity disturbances can cause pain or unconsciousness. (EXT: "The Tressaurian Intersection")

Their antennae could express feelings as well, such as attraction or fear. (DS9: "The Sound of Her Voice")

As well, the antennae help the resonance of their singing voices. (DIS: "There is a Tide...")

Andorians' reproductive organs are normally entirely retracted and the sex of some Andorians can be difficult to discern to outsiders. In some Andorian societies, Andorians are treated as neuter until they marry. In others, individuals are treated as sexed from childhood. (TNG novel: The Devil's Heart, "A Summary of the Physiological Roots of Andorian Culture", ENT: "These Are the Voyages...")

Depending upon whom you ask, Andorian reproduction involves two people with two roles each in the reproductive process, or there are four people required who each do one thing. These might be different social conventions built on the same biological facts. Two-person mating is prolific, whereas four-person mating entails a narrow window of fertility and a low birth-rate. ("A Summary of the Physiological Roots of Andorian Culture", DS9 Relaunch novels)

In the 22nd and 23rd centuries, some Andorians at least describe themselves as male or female, at least in discussion with non-Andorians, and form male-female pair-bonds, existing simultaneously with the prior traditions. (Star Trek: Enterprise; TOSS)

By the late 24th century, the four genders thaan, chan, shen, and zhen are used in general conversation, and four-person bonds are rigidly enforced by the dominant Andorian culture, with severe social penalties for non-compliance. This leads to a declining birth-rate and fears of a population crash. (DS9 relaunch novels)

Mating and gender are considered very private matters that tend not to be discussed off-world. Many Andorians have described themselves as either male or female, or used the standard English pronouns to avoid having to discuss their reproduction with "pinkskins". (DS9 Relaunch novels)

The working theory of the origins of the four-gender paradigm is a radiation disaster on the planet approximately 50 thousand Earth years ago. Because of severe chromosomal damage in the worst cases of radiation poisoning, the Andorian race was in danger of extinction and only saved by advanced DNA re-sequencing techniques. Because most of the male population was unable to contribute enough genetic material to produce a viable fetus, the males were divided into the thaan and chan sub-classes. Most zhens are biologically incapable of contributing genetic material to their offspring but are able to carry a fetus for the entire gestation period. The first shens were most likely hermaphrodites, acting as go-betweens in the conception process.

On the ice-covered planet Andoria, settlements are underground, heated by geothermal energy and connected by tunnels thousands of kilometers long. (Star Trek: Enterprise)

On Epsilon Indi IV, the tradition of living underground is still followed, even though it has a habitable surface. (EXT: "The Savage Empire", "The Tressaurian Intersection")

Andorians were a collectivist society; what befell one member of a quad or clan befell all, and likewise, any shame born by one clansman or bondmate was the shame of all. (DS9 relaunch novels; The Andor Files; Eighth Fleet RPG)

Referring to the benefits of group effort, "Many picks make a bigger dent in the ice" was a common Andorian saying. (Shield of Tomorrow: "The Pull, Part 1")

Andorian culture puts a high emphasis on physical courage; conversely, despair, depression, or suicide are shameful for the individual and their clan. When Thalek contracted depression he was tempted to act recklessly in battle as an alternative to overt suicide. (HF: "Coward's Death")

Many Andorians live outside of Andorian society and even the Federation. They are found as employees of Orion Syndicates, for example. (HF: "The Great Starship Robbery")

Andorian marriages involve four people, except when they do not. (TNG: "Data's Day")

In the main Andorian language the four participants are referred to as thaan, chan, shen, and zhen, and these are used as prefixes in their full formal names (as in ThorshkukJini zh’Thresh, where Thresh is a clan name). The name used in a Starfleet context may be part of their personal name (as in "Lieutenant Jini") or their prefixed clan name (as in "Lieutenant zh'Thresh"); it depends on the individual Andorian. (Starship Independence, Star Trek: Pendragon, TOSS)

Other Andorians have names that do not fit that pattern. (Starship Exeter, Star Trek: Remington, TOSS)

Andorians practiced herding, hunting and various forms of agriculture, so their diet was varied and omnivorous. However, they may require a minimum amount of animal protein in order to maintain their blue color. (Among The Clans; The Andor Files)

A typical Andorian meal will be familiar to "pinkskins" in emphasizing what Humans commonly call a "square meal": a protein course accompanied by a vegetable course and a carbohydrate course. Andorians commonly eat meals with hari, a flatbread which is used as a utensil. (Deep Space Nine Relaunch)

During the first year of the Earth-Romulan War, the Romulan Star Empire's Admiral Valdore only targeted Earth vessels. The Andorian government saw no need to get involved, so they officially did not take part -- until Andoria was attacked in 2157. Unfortunately for the Romulans, the Earth Starfleet -- led by Captain Stiles on the Challenger -- and the Andorian Guard -- led by Captain Shran -- were engaging in war games at the time. (The Romulan War: The Romulan War (Part 1))

During the Four Years War, the Third Fleet was based near Andoria. All of the officers and crews of the Third were Andorians. (Axanar: "Why We Fight")

Many, if not most, Loknar-class frigates had all-Andorian crews, which led to the nickname of the "Blue Fleet". (FASA RPG: Federation Ship Recognition Manual)

In 2374, Kotah, an Andorian, partnered up with a Klingon, named Ragon, to hijack the USS Phoenix-X for the Second Maquis. The two were successful in knocking out the crew, but were eventually thwarted by Captain Daniel. Kotah was imprisoned and taken to a Federation prison. (Star Trek: Phoenix-X: "Cookies", "The Cloud Aloft")

In 2380, an Andorian visited the USS Phoenix-X and began inquiring about classified information. Commander Seifer was forced to take quick action in stopping him from learning too much. (Star Trek: Phoenix-X (comics): "Secret Engine")

After The Burn, some Andorians and Orions had allied in a syndicate called the Emerald Chain, beginning in the late 31st century. (DIS: "Die Trying", "Scavengers") 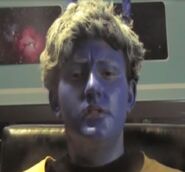