The Calafans were a light-skinned species from the Alpha Quadrant, eventually joining the United Federation of Planets. One of their most recognized physical features were their extremities, covered in ornate silvery scrollwork, and blond-white hair. Calafans from the Mirror universe were darker, with reddish hair and cooper-colored scrollwork on their extremities. The scrollwork was called calloo.

The original Calafan homeworld is Lafa II, which orbits four stars in the Lafa System. Due to the eccentric planetary orbits caused by the presence of four stars, planet numbers are designations that refer to size and not distance from any particular star. As a result, Lafa II is the second-largest of the twelve planets that make up the system.

The Calafans have moved onto all of the planets in the system except for Lafa I, which has radiation levels far too high to sustain life (In Between Days:Fortune).

Calafans were human-shaped and most (except for Mirror universe) natives had light white skin and white or silver-blonde hair. Calafans are all born bald and do not sprout hair until about their thirties. Having hair is a sign of aging (In Between Days:Reversal).

Calafans had psionic abilities, but those only came through their dream states. These enabled them to initiate and maintain long-term relationships with individuals in either the prime universe or the mirror. As a result, many Calafan marriages had four members, two from each universe (In Between Days:A Kind of Blue). 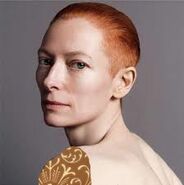 Add a photo to this gallery

It begins as a solid color, begins to break down in the individual's adult life, eventually becoming an individualized scrollwork pattern that is as unique as a fingerprint. As the individual ages, the calloo fades until it disappears altogether, and then death is imminent (In Between Days:Friday Visit).

Persons born without calloo cannot survive for more than perhaps a few months (Times of the HG Wells:You Mixed-Up Siciliano).

Calafans' marriages tend to be somewhat open, as the parties are expected to bond with someone outside of their universe as well as to someone within it. Relationships with those outside of one's universe were initially solely confined to the dream state. This changed when the Mirror Universe High Priestess, a teenager named Yimar, elected to permanently drop the barrier between the universes while transporting Douglas Jay Hayes Beckett from the mirror to the prime universe (In Between Days:Reversal).

Even after this 2157 event, Calafans continued to divide their relationships into daytime (their own universe) and nighttime (the counterpart universe) (In Between Days:Fortune).

The wedding ceremony contained four individuals – the two in their own universe and two others who represented the counterpart universe but did not necessarily have any sort of relationship with the couple, other than friendship (In Between Days:A Kind of Blue).

Calafans live in a democracy (In Between Days:Voice of the Common Man) and vote regularly. Voting is required for everyone who is of age. The First Minister is an elected role, but that person is generally male and is expected to supplement any ruling performed by the more ceremonial ruler, the High Priestess. Sometimes, they were married (In Between Days:Reversal).

Calafans do not have surnames. Names must be unique and, therefore, they are regulated by the government in order to prevent duplication. As a practical matter, Calafans often reserve a name during pregnancy. Many families name after deceased earlier family members, so sometimes a name is reserved after a family member's death and is then allowed for the next child born of that gender (In Between Days:Fortune).

Female names often include a yi- prefix, which means student of. Male names often include a -wev suffix, which means master of. The names are not intended to be sexist, and often are jokes, as a son named Fepwev (fep means small) would be considered the master of the small, meaning a microbiologist or a kindergarten teacher or maybe just a person who rules over a very small domain (In Between Days:Fortune).

In June of 2158, the High Priestess Yipran gave the Cuff of Lo to Lili O'Day as a token of friendship between their species. Lili in turn gave the cuff to Malcolm Reed as a declaration of love, in August of 2159. In December of 2202, on the occasion of his father's death, Declan Reed was willed the cuff, and eventually it passed to his descendant, Eleanor Daniels, who gave it to her fiancé, Thomas Grant. (In Between Days:Temper, Times of the HG Wells: The Point is Probably Moot,He Stays a Stranger).

In an alternate timeline, the Cuff of Lo was destroyed in 2178 when Malcolm Reed's ship, the USS Bluebird collided with the ISS Luna (In Between Days:Temper).

In a separate alternate timeline, the Cuff of Lo was given by Eleanor Daniels to her fiancé, Troy Scott (Times of the HG Wells: He Stays a Stranger).

Some time between 12000 BCE and 10000 BCE, the Calafan people were one color, and were able to readily travel between the prime universe and the mirror at any time and in any state.

There were four reigning persons, corresponding to the four stars. Lo and Ub were women; Abic and Fep were men. The species began to experience a speciation event, as the colors were changing. Lo, who was wed to Abic, had an affair with Fep. Ub, who was wed to Fep, had an affair with Abic. Both women were impregnated and both had daughters named for themselves. The daughters, Lo and Ub, were silver and copper, respectively. Two more pregnancies ensued, but these children were sired by the women's rightful husbands. These two sons were both named for their fathers. Abic and Fep were, respectively, silver and copper.

Due to the changes and obvious cuckholdings, the Calafans elected to create a barrier between the two universes. These were amplification and restriction dishes, appearing much like satellite dishes, on a rise which, in both universes, was named Point Abic. Utilizing regular bursts of ionizing radiation, the dishes in both universes were able to create an effective barrier, and the species was divided into two. Families were split up, much as is seen in North and South Korea.

This barrier remained in place until 2157 when the Mirror universe High Priestess, Yimar, decided to allow the barrier to fall permanently. The amplifier dishes remained in place, but they were made less powerful (In Between Days:Reversal, Temper, Fortune).

Images of actors are used to simulate the cast of the series. As a result a standard Calafan is portrayed by Tilda Swinton.

Retrieved from "https://stexpanded.fandom.com/wiki/Calafan?oldid=250529"
Community content is available under CC-BY-SA unless otherwise noted.