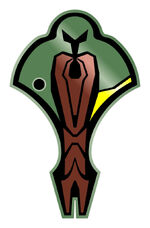 Legate is a rank given to members of the Central Command and high-ranking flag officers in the Cardassian military. This rank is roughly equivalent to a Starfleet Admiral.

Gul is a military rank held by the commander of a vessel or installation. The rank's closest approximation is a Starfleet Captain. Each Cardassian Order is led by a Gul. A ship's Gul will routinely take a cut of the profits from the cargo that his or her ship is transporting. Guls are often expected to entertain guests aboard their ships.

Guls sometimes commanded fleets in place of a Jagul. Guls also commanded tar'elkor and kes'elkor in the space forces as well as khesharo in the ground forces. (The Dominion War Sourcebook: The Fires of Armageddon)

Glinn is a military rank below Gul, probably a junior officer grade. Often times, two Glinns will report to a Gul (given the Cardassian penchant for organizing in threes).

Dai'elkor (squadrons) and mezreko are often commanded by a senior glinn. (The Dominion War Sourcebook: The Fires of Armageddon)

Arjagul was a Cardassian rank in their ground forces. Equivalent to a general, arjaguls commanded each order's jhorgators with all arjaguls reporting to a senior arjagul in orders with multiple jhorgators. As with the space forces a Idrig Arjagal (field general) was appointed during the Dominion War to oversee all of Cardassia's ground forces regardless of order. (The Dominion War Sourcebook: The Fires of Armageddon)

Jagul was a Cardassian rank. Equivalent to an admiral they were usually assigned to command a shodar. During the Dominion War an Idrig Jagul or Field Admiral was appointed to assume command over all of the Cardassian's space forces. (The Lost Era novel: Day of the Vipers; The Dominion War Sourcebook: The Fires of Armageddon)

Dal was a Cardassian rank below gul and above dalin. A dal commanded a peshdar. (The Lost Era novel: Day of the Vipers; The Dominion War Sourcebook: The Fires of Armageddon)

Dalin was a Cardassian rank below dalin and above glinn. A dalin commanded a brelgaro. (The Lost Era novel: Day of the Vipers; The Dominion War Sourcebook: The Fires of Armageddon)

Gil was a Cardassian rank below a glinn and roughly equivalent to an ensign in Starfleet. (The Lost Era novel: Day of the Vipers)

Kel was a Cardassian rank that was below a glinn. Kels were sometimes placed in command of a dai'elkor if there were no senior glinns in the unit. Kels also commanded tekhasors in the ground forces. (The Dominion War Sourcebook: The Fires of Armageddon)

The Sigils and Unions rank system derives very loosely from the system in the Terok Nor series of Deep Space Nine novels, but features heavy modifications to conform to the Cardăsda language. The most notable difference, however, is the placement of glinn just below gul; this choice derives from the XO-like function of Glinn Corat Damar and his immediate promotion to gul following Dukat's rise to legate. (Star Trek: Sigils and Unions, Star Trek: Deep Space Nine)

The reverence of age in Cardassian society leads to fewer total ranks in the Cardassian system; one's years and time-in-grade typically command authority over younger soldiers of the same titular rank (especially evident in the rank of ragoç--see below for details). There are four "categories" of rank, with the ranks of legate and ragoç standing by themselves.

The Cardassian equivalent of "cadet" is deghilzin. The name derives from a word roughly meaning "mosaic piece" (tessella would be the technical term in Federation Standard). Graduating deghi'ilzin are usually commissioned at the rank of ragoç upon graduation, unless they have earned the terminal degree in their field (such as a doctor).

From the root th-kl-v: to shape/mould. A legate is one who shapes Central Command policy.

From the root g-l: to command. A gul is one who commands a significantly-sized unit, or holds certain influential administrative positions.

From the root gl-n: to stand. A glinn is one who stands by his or her gul, figuratively speaking. In almost all cases, two glinns report to a gul: on a warship, the glinns hold the positions of XO and chief engineer. Though both glinns hold the same rank, the XO is the senior, but it is the gul who breaks impasses between the two.

From the root d-l-n: to channel. A dalin is one who channels inputs from varying specialties to develop comprehensive scenarios and reports. Typically the head of a major shipboard department.

From the root r-y-k: to specialize. A riyăk is one who specializes in a particular field. Younger ri'iyak do not hold supervisory roles; this comes with age and tenure. When an older riyăk does supervise, he or she will oversee the duties of those in the same specialty. In civilian society, this would typically represent skilled professions and trades—shipboard, this might include such positions as navigator, security chief, head of linguistics, a fighter pilot, and similar positions. This is the lowest rank that can be directly equated to the Federation’s idea of an “officer.” Highly-skilled professionals, when conscripted, enter at this rank.

From the root r-g-ç: to link. A ragoç links the ships’ officer contingent to the lower decks. There are two ways to earn this rank: to enter the Guard as an officer—typically an individual with a university or advanced trade school education, or to earn the rank by working one’s way up through the “conscriptee” ranks. This rank holds a combination of “green” young people and seasoned veterans and there is an interplay between age and position that determines seniority.

From the root g-r: to support. A gor supports the ragoç and officer staff and supervises younger conscriptees, but generally carries out policy rather than shaping it.

From the root g-rh-ç: to obey. A garheç obeys the orders of superiors in his or her day-to-day work. A garheç is typically just out of preparatory school and while very often a conscriptee, is sometimes a person from an economically-disadvantaged background who has entered the military for career experience and a ticket to trade-school upon separation.