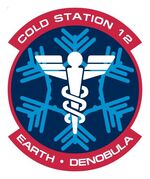 Cold Station 12 was a space station built on an asteroid that was used to store viruses and diseases for research purposes.

During the 22nd century, C-12 was a top-secret facility jointly operated by United Earth and the Denobulans under the Interspecies Medical Exchange program. It also held 1,800 embryos of 20th century Augments from the Eugenics Wars.

In 2154, the station was raided by Arik Soong to steal these embryos. In the process of escaping Soong released dozens of pathogens onto the station. It was predicted that it would take a year to decontaminate the entire station. (ENT: "Cold Station 12")

Retrieved from "https://stexpanded.fandom.com/wiki/Cold_Station_12?oldid=240217"
Community content is available under CC-BY-SA unless otherwise noted.