For the Changeling of the same name, see Daniel.

Daniel was an El-Aurian who operated a scout ship in the late 19th century. He crashed his ship into the Changeling homeworld, in search of a suitable place for some of his people to live, but was killed by the Female Changeling for being a solid. Before his death, a young and curious Changeling copied his likeness and name. (Star Trek: Phoenix-X: "The Links' Traitor") 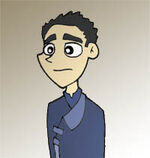 Retrieved from "https://stexpanded.fandom.com/wiki/Daniel_(El-Aurian)?oldid=272836"
Community content is available under CC-BY-SA unless otherwise noted.