The Deltans were a native humanoid species to the planet Delta IV and United Federation of Planets members.

Members of the Deltan race, both male and female, were bald and had the ability to ease pain in others through touch.

They were also a very sexually active species, with their pheromones and sub-conscious telepathy enhancing their appearance to non-Deltans. Because of this, Deltans serving in Starfleet and other positions dealing with other species took an oath of celibacy. (Star Trek: The Motion Picture) 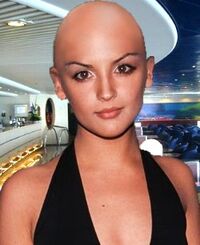 The ECS Horizon met some Deltans in 2141. Travis Mayweather later expressed, while they were very attractive and honest, the Deltans affected him, and he combated this by excessively working out in the gymnasium. (ENT: "Bound")

Delta Dynamics has the first Federation meeting with the Deltan species in 2262.

USS Enterprise navigator Ilia was a Deltan, who made contact with the V'Ger entity in 2272. She was officially listed as missing in action after the event. (Star Trek: The Motion Picture)

Deltan Starfleet specialist Aabin served aboard the USS Grissom until he and his crewmates were killed by a Klingon Bird-of-Prey in orbit of the Genesis Planet in 2385. (Star Trek: Grissom)

A female Deltan served aboard the USS Excelsior in 2285, while a year later, a male Deltan was an ambassador serving on the Federation Council. (Star Trek III: The Search for Spock; Star Trek IV: The Voyage Home)

Anara Rysyl was a Deltan Starfleet officer serving as the operations manager aboard the USS Sutherland from 2371 until 2376. She felt the Deltan oath of celibacy was archaic and discriminatory. (Star Trek: Sutherland)

Dariel was a Deltan Starfleet counselor serving aboard the USS Paragon in the 2370s. (Star Trek: Paragon)

In 2372, a Deltan crew and Paragon officer Kate Howard died aboard a Deltan ship after the Romulans planted a "crystalizing" virus aboard. Fellow Paragon officer Timothy Garrick was the only survivor. (Star Trek: Paragon: "The Captain's Day Off")

Ceci Ilia was a Deltan-human hybrid and civilian running Miss Ceci's club aboard the USS Independence from 2382 until at least 2386. (Starship Independence)

In 2383, a Deltan science team conducted astrological experiments aboard the Independence that nearly ended in disaster. (Starship Independence: "Marvelous")

Retrieved from "https://stexpanded.fandom.com/wiki/Deltan?oldid=294856"
Community content is available under CC-BY-SA unless otherwise noted.