Galorda Defense Fleet was a Klingon military unit in the early 25th century, led by the IKS Kragoth. Its home base was the solar orbital space station Galorda Outpost, located in the Galorda system. (Star Trek: Phoenix-X)

In 2410, when a holographic James Moriarty developed sentience and took over Galorda Outpost, he claimed he had enough power to assign himself the rank of General of Galorda Defense Fleet and all the privileges that lie therein. ("Holodeck Fantasy")

Later, three members of the fleet, Captains Sigon, Deloss and Kronen failed to save the Klingon-occupied planet Raatooras from a then-perceived attack by a Takarian Holy Sage merged with a local Arin'Sen named Hemly. After their delayed arrival, they conspired to wipe any mention of the planet from the Empire database, including the Federation database Memory Alpha. ("Only Ashes Remain")

When a temporarily disposed Captain Menchez, held long-term hostage by the Children of Khan, learned about the actions of his fleet members at Raatooras, he visited Q's Winter Wonderland to assign Captain Elektra the task of eliminating Sigon, Deloss and Kronen. ("Face the Kramp'Ihri")

Sometime later, the ships of Captains Andrea Reynolds, Sigon, Deloss, and Kronen became trapped in the realm of Gre'thor with only Reynolds' ship, the USS Hijinx escaping, albeit severely damaged, to tell Elektra about the others. Elektra then enlisted the services of a Fek'lhri Cheiftain named Rukkh to open a portal on Archanis IV in order to retrieve them. ("Deadly Alliance") 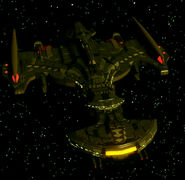 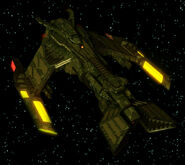 IKS Valentine
Add a photo to this gallery

Retrieved from "https://stexpanded.fandom.com/wiki/Galorda_Defense_Fleet?oldid=285005"
Community content is available under CC-BY-SA unless otherwise noted.