Menrow in the 24th century[]

In 2375, Menrow's ship took part in a small fleet to protect the Flortarios sector. During the introductory meeting, he disciplined Ensign Dan for sleeping, but congratulated him when Ensign Dan helped to save Commander Night Gotens' life. He later took the Crucial into battle against a Jem'Hadar attack, where he provided backup for the USS Tsunami when it was being fired at by two Jem'Hadar vessels. ("The Bajoran Trove")

Menrow and the Captain's of the other fleet ships decided to hold a grudge against the Phoenix-X. In 2377, the fleet was reunited in a mission to help the Ceavon, and he, along with the other Captain's, were able to confront the Phoenix-X on the issue. While being under command of Captain Jet, Menrow explained to Captain Daniel that Jet had recently become aware of the USS Phoenix-X's secret transwarp drive. When the Phoenix-X came under mental influence by a virus and began attacking the Ceavon homeworld, Menrow coordinated the fleet ships in response. He ordered the USS Dropzone to rally survivors from attacked planetary bases, the USS Tsunami and USS Ixion to evacuate the planet, and the USS Hijinx and USS Jenova to assist in firing upon the Phoenix-X. ("Loyalties, Parts I & II")

In 2380, Menrow, aboard the Crucial, along with the USS Kitana investigated a Gordarion egg ship which was transforming Saturn's rings into a quantum fissure. When both vessels attempted to correct the issue, they were knocked back by the egg ship. Captain Reynolds aboard the Hijinx, next, intervened and was successful in stopping them, but simultaneously transported to a Borg-infested universe. ("Hijinx")

In 2382, Menrow was forced to restart his personal and Captain's log entries when Grunley and Ferona lost all of the Crucial's logs, in a computer mishap, by accident. In the same week, the Crucial was attacked by the Ferengi marauder Diamond's Link, to which Menrow refused to communicate with out of spite, but eventually did and learned the Crucial was being attacked out of a case of mistaken identity. ("Crucial")

Two years later, on-route to escort an Ambassador to a colony world, the Crucial came under attack by an Arkarian starship. When Night Gotens and Doctor Lox, aboard the runabout USS Iroh, hailed to assist, Menrow snapped at them for being an insufficient backup. Despite that, the two vessels were able to ward off the attackers. Later, the Crucial visited Rochani III, where Menrow beamed down with Seifer and the Ambassador to meet its locals, who half-consisted of the crew of the USS Dark Glory. After the visit, the Ambassador turned on the Federation and led a team aboard the Crucial to attack, but before any serious damage was done, he escaped on his own people's ship. Menrow rescued the crew of the Dark Glory from the planet below. Menrow joined the senior staff of the Phoenix-X in their Conference room for the post-meeting wrap-up with Section 31. While there, he attempted to insult Agent's Elena and Nelkast. ("Remnants")

In 2390, while the Crucial and Jenova were docked at Starbase 78, both ships came under surprise-attack by Hirogen. The attack sent Menrow to the hospital where a medical team which included an undercover Traveler named Wayfar was unable to save him. In the meantime, Hatcha took command of the newly refitted Intrepid-class Crucial and re-joined Task Force Epsilon, along with Task Force Zeta, in stopping the Hirogen. Feeling responsible, Wayfar used his space and time powers to attempt to revive Menrow, but during the process was intervened upon by Menrow's senior staff-- an intervention that led Menrow and the staff to be mind-displaced into similar-looking bodies in the 28th century, aboard what was then referred to as Starbase 001. There, Menrow and his staff lived as thieves, unaware of their past, until Menrow was stopped by Rune Sith during an attempt to steal the Bajoran Orb of Summons. Being sent into the future, the bodies of Menrow and his senior staff, in the 24th century, were left to be helmed by dummy-versions of themselves. It wouldn't be until the year 2410 that their displaced minds would returned from the 28th century. ("Into Harshness", "Second Life", "For the World is Worldly and Such")

With Menrow's consciousness in the future, a dummy-consciousness maintained his body in the present. ("Second Life")

In 2753, Menrow and his senior staff's consciousnesses were transfered to the 28th century. There, for a short while, they lived as highly skilled criminals, until they were taken down by Security chief Rune Sith and the crew of Starbase 001. Feeling like he was a different, better person, Menrow decided to change his ways and, with a robot-spider named Zeta, he assisted in stopping an Alliance-member Takaran named Kebb from using the Orb of Summons to destroy the Earth. Soon after, with the help of Wayfar, he and his staff were sent back in time, but instead of returning to the year 2390, when they left, they returned to the year 2410. ("Second Life")

In 2390, onward, Menrow and his senior staff led "dummy-lives" in their same bodies, after Menrow was inexplicably half-saved by the Traveler, Wayfar, who unknowingly sent their primary consciousnesses into the 28th century. The "dummy-version" of Menrow re-took command of the Crucial. ("Second Life", "Lazarus", "Someone to Remember Them By")

Sometime before 2406, the "dummy-version" of Menrow, his "dummy-version" senior staff, his crew, the Crucial and several other starships were caught in a massive molecular reversion field, intermixed with an ion storm, the result of which caused him and everyone involved to undergo a reduction in age. The trauma from the accident also caused all included to temporarily lose years of memories, and, in most cases, caused everyone to re-take Starfleet Academy in 2409. ("Delta Recruit")

Sometime before 2410, "dummy-version" Menrow slept with a Klingon woman named Treth and unknowingly impregnated her. Being that his body's cells were in a temporal altered state, due to Wayfar, years earlier, Menrow passed on delta series radioisotopes to his future son, Feng, of which his future son, Feng, would later be immune. ("Someone to Remember Them By")

In 2410, Menrow and his crew were returned to the 25th century, to their surprise and Wayfar's explanation that he was not very good at space-time alteration. Despite this, Menrow and the crew were forced to stay, knowingly having replaced the "dummy-consciousnesses" which had inhabited their bodies for the past 20 years, and forced to learn about everything that had happened through personal logs. ("Second Life")

Shortly after the Phoenix-X was enveloped by the Calibus IV virus, Menrow and Captain Oroku Seifer had a quick exchange about those events. Menrow surmised that the experience was, instead, Seifer moving in with Menrow's "ex". ("Status Update")

On the Kobali homeworld, where Starfleet was assisting the Kobali against, what appeared to be a Vaadwaur invasion, Menrow's Chief engineer, Grunley, was killed in-action during a surface shoot-out. Menrow came into conflict with Grunley's father, Earth engineer, Jarken, when a Kobali elder requested that Grunley be revived as Kobali. When Grunley's joining with the Kobali backfired and Grunley returned to the ship, Menrow held a welcome home party in the Crucial's messhall-- a party which, to Menrow's disappointment, was crashed by Wayfar. ("Lazarus")

While Cide was in control of Menrow's body, he used the Crucial to attack several Federation Science vessels at Vandor IV and utilize its research to capture the Barzan wormhole and redirect it to the Takarian homeworld in the Delta Quadrant. During this process, he purchased the rights to the Takarian homeworld, from Arridor and Kol, and set up a trade agreement with the Orion Syndicate. With these setups, the Ferengi-embodied crew of the Crucial, led by Cide/Menrow, enslaved the Takarian homeworld. This was put to a stop when Captain's Andrea Reynolds and Iviok disrupted their mind control equipment and when Wayfar reversed the mind switch.

During Cide's shenanigans in Menrow's body, Menrow, and his crew, existed in a non-corporeal state until Wayfar returned them to their bodies. Menrow and his crew found themselves in the Delta Quadrant, on the Takarian homeworld.

Back in their bodies, Menrow led his crew to evacuate the Takarian homeworld, in the Delta Quadrant. While Reynolds and Iviok tasked themselves to re-harvest the Barzan wormhole, Menrow was met with one of his past lovers, a Klingon female named Treth, who was honor-bound to introduce him to his biological half-Klingon, half-Human son, Feng. Unfortunately, since Menrow's copulation with Treth happened during his first mind-switch, Treth no longer felt honor-bound to include Menrow in Feng's life. She further told Menrow that no woman would want to make a life with him, as per his womanizing nature. She quickly exited aboard the modified probe she arrived on, but, cloaked, would use it to follow Menrow and the Crucial back through the short-live-contorlled Barzan wormhole to the Alpha Quadrant. ("Someone to Remember Them By")

Having retained an Orion slave girl named Chatelaine, a remnant of Cide's dealing with the Syndicate, Menrow poised to release her from the Crucial's brig due to her cooperation and agreement to testify against Cide. Through a series of unfortunate circumstances, some a deliberate orchestration by Chatelaine, Menrow double-booked a date-night and accidentally ended up with several women in his quarters: a situation he deemed as his Kobayashi Maru scenario. The stand-off of such an awkward, unexplainable situation was quickly diverted by a Starfleet priority alert, calling on the Crucial to assist in the sudden invasion of the Iconians. ("The Arrival")

During a mission to escort the President of the United Federation of Planets Annek Okeg from Casperia Prime to home, the Crucial was attacked and invaded by a Crystalline Shard which spawned smaller baby shards into the ship. The crew was forced to evacuate and Menrow, with the President, was picked up by the IKS Masamune. Deloss and an away team joined Menrow and Okeg aboard the near-destroyed Crucial to hunt down the crystalline shard, which they found merged into the warp core. Upon destroying it, Deloss left Menrow and Okeg to deal with their predicament. ("Election Year")

According to his records, Menrow liked taking long walks on the beach. ("The Bajoran Trove") 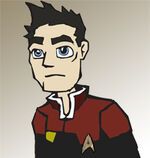