Kayl was a Starfleet officer aboard the USS Phoenix-X. She held the rank of Lieutenant, and was Chief of Operations, capable of doubling as a science officer when needed. (Star Trek: Phoenix-X)

In 2361, while surveying a wormhole from a Starfleet shuttle, a Gordarion eggship appeared from it and immediately abducted Kayl to perform experimentations on her. After activating certain parts of her brain, Kayl became "double telepathic", able to communicate and recieve communication from non-telepathic people. ("Experimentalism")

In 2374, she was transferred from a previous assignment to a failed transwarp test ship, the USS Phoenix-X - unknowingly being recruited onto a ship that would eventually be controlled by Section 31. ("The Tiloniam System", "The Links' Traitor", "Jumpers, Part I", "The Tilonian System")

In 2383, on a trip to the Turismo homeworld to visit her daughter, her ship, the Raptor, was suddenly caught in a molecular reversion field. The Phoenix-X successfully saved her from destruction, but upon transport, Kayl was reverted to a youthful age. She then decided to re-join the crew of the Phoenix-X. ("Life 2")

Sometime before 2406, Kayl, for the second time, and the crew of the Phoenix-X were caught in the same massive molecular reversion field, intermixed with an ion storm, that the USS Hijinx and several other starships were also caught in. The result of being trapped in this phenomenon caused her and everyone involved to undergo a reduction in age. The trauma from the accident caused all included to temporarily lose years of memories. ("Delta Recruit")

Like Captain Reynolds, it is likely she retook Starfleet Academy, aligning with events in Star Trek Online.

In 2376, Kayl had been with Red, but cheated on him when she began kissing GoyCho during the crew's incarceration aboard a Borg cube. ("The Return of the Borg")

"Red thinks everything is a hostile attempt. On Tuesday, when I offered to walk him to his Diplomacy classes, he threatened to break my legs."
— "The Nega'Jem, Part I" 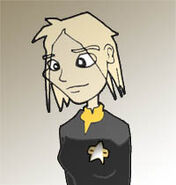 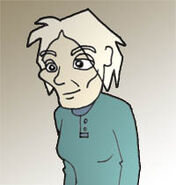 Add a photo to this gallery

Retrieved from "https://stexpanded.fandom.com/wiki/Kayl?oldid=286604"
Community content is available under CC-BY-SA unless otherwise noted.