Lox was a Starfleet chief medical officer aboard the USS Phoenix-X. He was constantly discredited within the medical and scientific community and was often seen as a "mad-scientist". (Star Trek: Phoenix-X)

In 2378, while attempting to use genetics to cure the crew of the USS Phoenix-X of a disease that killed off the Eluvae, Lox discovered a semi-corporeal Trump parasite that was also the disease cause. With a direct connection between an attacking space creature of the Trump species and the parasite, Lox trapped the parasite onto an adrift Eluvae ship. While there, Lox acquired the last DNA samples of many organisms from the Eluvae homeworld before the Trump creature was able to destroy the ship. ("Mosquito")

Two years later, with Lox in possession of the last of the Eluvae's genetic samples, he struck up a deal with Section 31 to recreate the Eluvae civilization through genetic growth. With the help of the crew of the USS Ixion, Lox inhabited an empty planet and over the course of months, grew new Eluvae humanoids. It wasn't long before the New Eluvae revolted against Lox and hijacked the Ixion for themselves. They claimed they had the right to explore the galaxy for themselves. ("Civilization")

In 2384, Commander Seifer and Doctor Lox took the runabout Iroh to Moab IV in order to seek a Doctor Torvin's assistance in curing genetic alterations to the Seifer symbiont. Torvin was successful in achieving this, where Lox wasn't. The Seifer symbiont was returned to normal. ("Remnants")

Two years later, in response to a Srivani scientist's remodification of the Seifer symbiont, Lox brought sentience to a group of tribble. To do this, he used a modified form of the Lovidian flu, the Klingon augment virus, through a Genitronic replicator. His goal was to show up the Srivani scientist, Kaulani, but the tribble were eventually defeated by reptiles imported in from the planet Iota Geminorum IV. ("Triple Tribble Sunday") 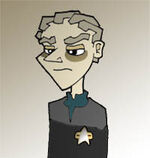 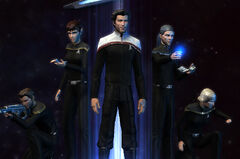 Retrieved from "https://stexpanded.fandom.com/wiki/Lox?oldid=286593"
Community content is available under CC-BY-SA unless otherwise noted.