Commander Melora Lexis was the wing commander aboard the starship Independence. Her call sign is "Hat Trick", or "HT" for short.

Melora was born on Copernicus City on Luna. She always had a love of flying from an early age, obtaining her basic pilot's license on her 16th birthday and never looking back. At the Academy, she became the first cadet to serve two tours of duty consecutively with the prestigious Nova Squadron demonstration flight team, first as Opposing Solo and subsequently as Squadron CO and Flight Lead. The experience of flying small, fast fighter-sized spacecraft changed her outlook on flying, and in her final year, transferred her curriculum credits over to the Starfleet Marines and enrolled in their infamous "Q Course" (qualification course).

She graduated from the Q Course six months later, spending another four weeks in accelerated combat-readiness workups before qualifying as a front-line combat pilot in Valkyrie and Harrier strike fighters and flew in the closing phases of the Dominion War, assigned to the Musashi Strike Fighter Squadron "Silver Katanas".

The squadron name "Silver Katanas" was derived from an old PC-based computer roleplaying game "The Secret of the Silver Blades". As this squadron was embarked aboard USS Musashi, it seemed appropriate that they would be known as "Silver Kanatas".

She obtained her present callsign "Hat Trick" when she destroyed three Cardassian fighters with no guns and only a single missile remaining (she shot one down and maneuvered the other two into colliding with each other), a feat for which she also earned her first Starfleet Cross. Her former callsign had been "Posh", which she earned after accidentally letting slip that she was looking forward to a perm and a manicure following jungle survival training. (Starship Independence: "A Dish Best Served Cold") 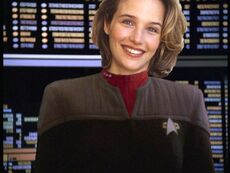 Following the disestablishment of her squadron after the war, she returned to Earth and joined Starfleet Command R&D Division as a Test Pilot and Field Program Manager on the Viper-class project. On the completion of this phase of her planet-based tour of duty, Melora returned to operational service aboard a starship.

She was initially Executive Officer and then Commanding Officer of the USS Independence's Alpha Squadron, the "Sundowners", before she became Wing Commander of the Independence starfighter wing. In this role, she continues to oversee the field test program for the Super Vipers, as well as the tactical and operational doctrine of the Wild Viper electronic warfare strike fighter.

The Viper was very affectionately named for the fighter in Battlestar Galactica, and the Valkyrie was named for the shape-changing 'mech from Macross.

Melora's bright heather-grey eyes gaze out from a heart-shaped face that seems more wholesome than attractive. Her thick, brown curls reach down to the nape of her neck, and she prefers to wear her hair loose and easy, which makes them appear perpetually as if they're about to be blown in the wind. She stands tall and proud, an air of quiet confidence in her carriage, and when she moves, her long limbs swing with the grace and ease of a natural-born athlete.

Her demeanour tends to be easy and outgoing, as one might expect from a natural-born pilot and a combat-experienced Marine officer. Attentive and highly disciplined on duty, she eagerly mingles with friends on her time off and enjoys an active social life outside the cockpit. A long-standing habit of hers is wearing a pair of non-standard fingerless gloves when she's in the cockpit. She avoids talking about her fiancée, who was lost in 2374 in the Oriente Sector.

Melora has an extremely keen mind that absorbs a great deal more than people realize. For all her outgoing nature, there is a part of Melora that she keeps hidden from others and seldom talks about. Her more perceptive friends realize that there is more to her inwardly than they realize, but they know better than to ask. She will share in her own good time when she is ready.

Mountain climbing; going to the holodeck; flying. Melora will try to fly just about anything that is humanly possible. She is to airplanes and small spacecraft what the legendary Captain James T. Kirk is to alien women: once they have a target in their sights, they won't let them get away without at least a ride into the wild blue yonder and back.

As a graduate of the Q Course, Melora is a commissioned Marine Officer, having seen action as a Valkyrie combat pilot aboard USS Musashi, credited with 8 kills and 12 assists.

Among her various medals and commendations are the Starfleet Cross with cluster, the Starfleet Meritorious Service Medal, a Bajoran Starburst (1st Class) and two Purple Hearts.

After the war, she spent four years as a Test Pilot evaluating and flying Viper prototypes at the Tamworth R&D facility in Australia, Earth, from project inception to operational deployment, before returning to current starship duty aboard USS Independence.

She was assigned temporary command of the Akira-class starship USS Concordance on Stardate 61140 for a joint Starfleet-Klingon "Exercise Grand Slam." Using unorthodox combat tactics, Melora managed to destroy the opposing Klingon flagship T'lach Kor while stopping the Klingon boarding parties on her own starship. (Starship Independence: "Summon the Heroes")

On Stardate 61200.1, she was advanced to the rank of Commander in an inter-service transfer, and in the same promotion ceremony was also awarded Starfleet's Meritorious Service Medal in recognition of her contributions to the Viper development project as well as her leadership of the Independence starwing. Her sister, Polina Haywood, was present to pin her new rank. ("A Dish Best Served Cold")

Retrieved from "https://stexpanded.fandom.com/wiki/Melora_Lexis?oldid=237802"
Community content is available under CC-BY-SA unless otherwise noted.