Lieutenant Commander Mika was the science officer of the USS Dropzone in the late 24th and early 25th century. She was stationed at Starbase 55. (Star Trek: Phoenix-X, Star Trek Online: Unofficial Literary Challenge)

In 2390, when the Dropzone was nearly destroyed by Hirogen, Mika escaped aboard the shuttlecraft Tengu and used it to track down and conscript the USS Phoenix-X for help. ("Into Harshness")

It can be assumed that sometime before 2406, Mika and the crew of the Dropzone were caught in the same massive molecular reversion field, intermixed with an ion storm, that the USS Hijinx and several other starships were caught in. The result of being trapped in this phenomenon caused her and everyone involved to undergo a reduction in age. The trauma from the accident caused all included to temporarily lose years of memories. Like Captain Reynolds, it is likely she retook Starfleet Academy, aligning with events in Star Trek Online. ("Delta Recruit")

In 2410, after fighting several Herald invaders at Quadra Sigma III, Mika joined Samya's away team back to the Dropzone to find it hijacked by vicious animal things put there by Qu. She assisted in taking it back, but preferred to gain control of her captors through song. ("The Sound of Q-sic")

After the Iconian War, Mika and Jarell observed the speedy recovery of Spacedock due mostly in part to exocomps. ("Aftermath") 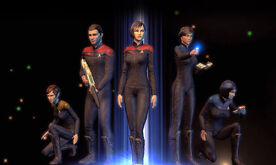 Retrieved from "https://stexpanded.fandom.com/wiki/Mika?oldid=286601"
Community content is available under CC-BY-SA unless otherwise noted.