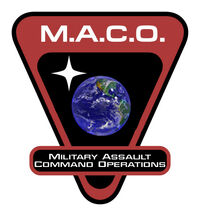 The MACOs (an acronym for Military Assault Command Operations) is a military organization in service in the Federation from the 2150s through the late 24th century. The MACOs (pronounced "MAY-ko") operate in tandem with Starfleet personnel. This allows them the freedom to operate outside of the direct chain of command. Though they are afforded this freedom, on board a Starfleet ship, they accept orders from the captain and the command staff.

MACOs have similar training and tactics as the special forces of a number of member nations of United Earth (the US Navy SEALS, Delta Force, Army Rangers, Marine Force Recon, Special Air Service, etc), and their rank insignia is similar to that of the U.S. Marine Corps. Their operation aboard Starfleet vessels is comparable to that of the U.S. Marines on board U.S. Navy vessels in the 20th and 21st centuries.

In the 22nd centuryEdit

During the 2150's the MACO's were overseen by General Casey. At the time MACO posts included Atlanta and the Janus loop. The primary training post was West Point in New York. MACO's were deployed aboard Starfleet vessels during the Xindi crisis, and remained aboard until the birth of the Federation. (ENT: "The Expanse", "The Xindi", "Hatchery", "The Council")

A detachment of troops were assigned to the Enterprise under the commanded of Major J. Hayes during the ship's mission into the Delphic Expanse in 2153. (ENT: "The Expanse")

In the 23rd centuryEdit

After the Xindi War, the newly formed Federation began to set its sights on the peaceful exploration of the Galaxy. It was decided that MACO's projected the wrong image for ships of peace, and therefore they were slowly phased out of primary starship service, leaving the protection of the larger starships to their own security forces. By the end of the 22nd century, MACO's could only be found on board the lighter ships of Starfleet.

MACO's would return to regular service, however, to great advantage during both the Earth-Romulan War in 2266 as well as the beginning of the Klingon Cold War in the 2240s, but as these wars were resolved or waned, MACOs would once again be pushed into the service of the lower-line vessels of the fleet. (Tamerlane)

The MACOs on the TamerlaneEdit

The USS Tamerlane along with a number of her sister ships have carried MACOs aboard since the beginning of the Klingon Cold War. Most of the time the MACOs were used as boarding parties or ground assault troops, but as the war cooled down, they began to find roles more akin to their Starfleet counterparts.

Led by Major James Arbough, the MACOs of the Tamerlane in the latter part of her career have seen some very interesting missions, but have often found themselves prepped for battles that rarely, if ever, occur. (Tamerlane)

The MACOs on the SaladinEdit

In the 24th centuryEdit

The ground-combat uniform pictured was never established in canon as belonging to a military branch other than Starfleet, but is consistent with the description of MACO uniforms in Star Trek: War Aftermath and Star Trek: Lambda Paz.

In 2382, with the growing tensions between the Federation and the So'ja Coalition, the Starfleet Marine Corps reinstated the MACOs as onboard ship military specialist to deal with situations where normal Starfleet security officers could not. With the outbreak of the Coalition War, Starfleet Command issued orders to have MACO teams on all ships actively engaged in fighting. ("The Hornet's Nest")

In 2383, the Horizon Project recruited a team of MACOs for project security. Major James Morgan was selected to head the team, as well as receiving a promotion to Colonel. The team, along with the test vessel, USS Horizon was lost after jumping away from a Breen attack in the Dallos Cluster. (Star Trek: Far Horizons: "Jump")

In the 25th centuryEdit

By 2407 the MACOs had been reestablished as a subsection of Starfleet Security. MACOs were trained in operations such as orbit-to-surface insertions and to clear landing zones. (Bait and Switch: The Wrong Reflection, "Brother on Brother, Daughter on Mother")

Unlike their original incarnation, Starfleet MACOs used naval-styled ranks rather than army-style. Enlisted members of the MACOs used the rating special warfare operator, while commissioned officers were referred to as special warfare officers. (Bait and Switch: "Brother on Brother, Daughter on Mother", "All In")

Bait and Switch creator StarSword has mentioned in various forum posts that in his writing the MACOs are intended as the Starfleet equivalent of United States Navy SEALs, rather than as a separate service branch. 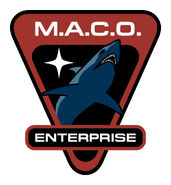 The MACO patch for the Enterprise squad. 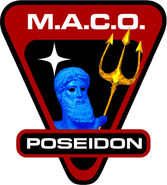 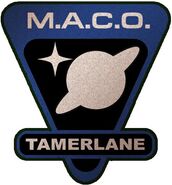 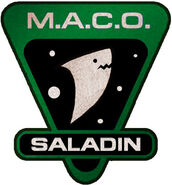 The patch for the USS Saladin MACO detachment. 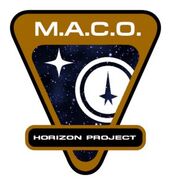 The patch for the {{uss|Horizon|NCC-91901}} MACO detachment for Horizon Project.
Add a photo to this gallery

Retrieved from "https://stexpanded.fandom.com/wiki/Military_Assault_Command_Operations?oldid=282047"
Community content is available under CC-BY-SA unless otherwise noted.