You may also be looking for Night Seifer, of the same Trill host.

Night Gotens (more commonly known as just Gotens) was a joined Trill and host of the Gotens symbiont. He was joined from 2365 to 2379 and served as first officer on both the USS Xena, and the USS Phoenix-X. In 2379, after his symbiont was stolen and replaced by the Seifer symbiont, he became Night Seifer. (Star Trek: Phoenix-X)

Gotens was promoted to first officer aboard the USS Xena. While there, he served under Captain Aeris, with a mostly female populated crew except for Ensign Dan and Lieutenant Commander Wing. ("The Tiloniam System", "The Tilonian System")

Sometime in the late 2360s, Gotens and the USS Xena responded to a distress call from the Cardassian starship Tarak. The Tarak was engaged in battle with a Romulan starship and it became apparent that the Tarak was quickly losing the fight. Captain Aeris then decided to give aid before it was too late and through opening a communication with the Cardassians, Gotens was introduced to Gul Meloneus. Meloneus was quick to turn on the Xena when the Xena came under attack by the Romulan ship, and Meloneus denied requests for assistance. He decided to allow the impending doom as a distraction while he geared his efforts into taking over the Romulan ship. He and Gotens would not forget each other after this encounter. ("Missed the Mishap")

On Gotens' last mission, in 2374, he and Ensign Dan took a shuttle to the Tiloniam system in order to explore its vast mystery. Unfortunately, they were ambushed by a Jem'Hadar attack fleet, which required the nearby USS Phoenix to save them. After a battle that nearly totaled the Phoenix, both Gotens and Ensign Dan were re-assigned to the USS Phoenix-X, a previously embarked starship for the X-Project. ("The Tiloniam System", "The Tilonian System")

In 2374, Commander Night Gotens was instrumental in saving his own away team from capture within a small Jem'Hadar base on Flortarios III. He executed impressive computer hacking skills over Dominion technology, enabling contact with the Phoenix-X. ("Flortarios III")

In the same year, both Commander Gotens and Captain Daniel were captured by Gul Meloneus and placed in a cell within his ship. The two worked together in escaping and retaking the vessel. The Cardassian ship, Tarak, was then towed back to Starfleet. ("Missed the Mishap")

In 2375, Gotens misinterpreted orders from Captain Sisko and accidentally stole the USS Defiant from Deep Space 9. The issue was quickly averted with the help of the USS Xena. Gotens was then taken back to the Flortarios system where the Phoenix-X was in command of a small fleet. There, both he and Jadzia were helpful in capturing a renegade Changeling that Captain Daniel was on a mission to apprehend. ("Home, Part I & II")

In 2379, his joining with the Gotens symbiont ended when Trill thieves operated and stole the symbiont right out of his body and replaced it with the Seifer symbiont. From then on, he became the joined Trill known as Night Seifer. ("Secret Shuttles, Part I")

Gotens worked closely with Captain Aeris aboard the USS Xena. But he never began seeing her until his move to the Phoenix-X. In 2374 Aeris beamed aboard the Phoenix-X for dinner with the Commander, but the two were unfortunately part of the crew's capture when the Phoenix-X was taken over by Dawn Relic. ("Crash Bandicoots")

In 2376, the Phoenix-X was decommissioned by Commander Avery, forcing the crew to transfer to other postings. Gotens himself had returned the Xena, but found his relationship with Aeris growing even more to the point of asking her to marry him. Aeris had expected this, but, unfortunately, the Commander then received a clue to the missing whereabouts of Captain Daniel. He placed his relationship on hold to search for Daniel, beginning a distance between himself and Aeris. ("Experimentalism")

Avery was first officer of the Phoenix in 2374. He was known for his temperamental short bursts of rage and his attachment to upholding Starfleet's rules.

Unfortunately, he was never transferred to the USS Phoenix-X with the rest of the crew when the Phoenix was nearly totaled in the Tiloniam system. When he realized that Gotens had taken his place on the Phoenix-X, he immediately fell in spite and promised Gotens that he'd be "watching" him for any slip-ups.

Avery got his chance for revenge two years later when he was given the authority for an official inspection of the Phoenix-X. While there, Gotens ran several experiments boarding along the lines of practical jokes in order to test the theory that Avery was susceptible to short bursts of rage.

Meanwhile, Avery took his authority one step further and decommissioned the ship, which would force Gotens and the crew to relocate to other ship postings. Avery wouldn't even listen to Gotens' offer to drop his own personal Starfleet commission. Avery found that decommissioning the ship was a far better form of revenge.

A few months later, Avery attempted to have the Phoenix-X dismantled at a starship dismantling station. Gotens found out about it and got to the station as fast as he could. But Avery was already there, anticipating Gotens. While trying to take control of the Phoenix-X before the dismantling procedure, Gotens was forced to fight Avery aboard the ship - who used holographic opponents as obstacles for Gotens.

Using an advanced neural-holo chip attached to his temples, Avery was able to merely think of certain holograms and make them appear. When the Gordarions captured both Avery and Gotens, they enabled the chip to control previously experimented Changelings Daniel and Shane for use against a rebellious Gotens. Avery's mind itself was placed under the control of the Gordarions.

Gotens admitted that Avery was missing from his previously known location within the Throne room after Gotens' second visit. He speculated that the Gordarions might have taken Avery in an escape pod before the large Gordarion ship was destroyed. ("The Tiloniam System", "Experimentalism")

The Trill to answer the call was named James. He received the mirror Gotens symbiont and escaped the Phoenix-V before its destruction by the Phoenix-X. After his joining, he became a "mixed-Universe" creation of being an "original Universe" host with a mirror universe symbiont. His official name was then James Gotens. ("Pure Evil")

James kidnapped the crew and stole the Phoenix-X, in an attempt to return to the mirror universe, four years later. He and a partner, Lex, tried selling the crew as slaves to the Klingon-Cardassian Alliance in exchange for a position within the Alliance - but was thwarted by the Seifer symbiont. ("Mirrorlyness!")

Thus, using an advanced holographic medical program to execute the procedure in 2377, Commander Gotens was kidnapped on his own ship and given the Seifer symbiont: turning him into Commander Seifer.

Lex received the Gotens symbiont and remained partners, if not lovers, with James after their successful escape. She then became Lex Gotens. ("Secret Shuttles, Part I, II, III, & IV")

Both Lex and James tried to sell the Phoenix-X crew as slaves to the Klingon-Cardassian Alliance in the mirror universe, four years later, but were foiled by the Seifer symbiont. ("Mirrorlyness!")

At the very end of 2374, Gotens was incapacitated by a drug found within a cookie. It was implemented upon the entire Phoenix-X crew by a renegade Klingon and Andorian working for the Dominion. In early 2375, Gotens began to feel recurring effects of the drug, which unbalanced his chemical link to his symbiont. While on Deep Space 9, Doctor Julian Bashir operated on Gotens to fix the problem. ("Cookies", "Home, Part I")

Later that year, Gotens was infected by the Bajoran drink called the Bajoran trove. The drink had adverse effects on Gotens' symbiont connection, prompting the Commander to unconsciously divulge in telling stories of his past lives. He was quickly saved with the help of Ensign Dan during a meeting of fleet Captain's and Commander's on Flortarios III. ("The Bajoran Trove")

Commander Gotens was one of the non-humans who were unaffected by a type of radiation, in the form of a weapon, that was launched by the Gelomira. ("Bio Level 4")

The Commander's name was always an inconsistent element at the beginning of the Season 1. In Season 2 when it finally changed to Seifer, it remained that way onwards. Name changes: 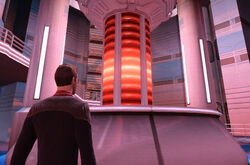 Retrieved from "https://stexpanded.fandom.com/wiki/Night_Gotens?oldid=298676"
Community content is available under CC-BY-SA unless otherwise noted.