You may also be looking for Night Gotens, of the same Trill host.

Night Seifer was a joined Trill, second-host of the Seifer symbiont and second symbiont of the Night host. He began his symbiotic existence in 2379, joined against his will, when his previous symbiont, the Gotens symbiont, was stolen and replaced. Before his forced-joining, he was known as Night Gotens. Night Seifer served as a Starfleet first officer and then commanding officer aboard the USS Phoenix-X in the late 24th century. (Star Trek: Phoenix-X)

Seifer served as first officer aboard the USS Phoenix-X as Night Gotens before he was joined against his will to the Seifer symbiont by Trill thieves in 2377. ("Secret Shuttles, Part I")

After being joined to the Seifer symbiont against his will in 2377, he and the Phoenix-X were transported back in time to the year 2375. ("Secret Shuttles, Part I & II")

In the time-loop beginning in 2375, Seifer realized his obsession with getting the Gotens symbiont back and hijacked the top vector of the Phoenix-X in search. He was ultimately forced to command a skeleton crew in a planned two-year hiatus while the bottom two vectors of the ship returned to the present they came from. The hiatus would last until he could rejoin them again. ("Secret Shuttles, Part IV")

During this time-loop covering several years, Seifer hijacked the vector and tried to force it into the mirror universe three times. During one of these times, he met and befrended Tevahn. ("Secret Shuttles, Part IV", "Avalon Battlefield, Part I")

In 2376, during the time-loop, Seifer sold five crates of yak cheese to Kuoket of the Nausicaan Guard for sick Skkrrea refugees. He then sold the refugees to the Ferengi for a hefty price. ("Devil's Leftovers")

In early 2377, Seifer was broken out of the Brig by Tevahn who took him to space station Heckacos Social. There he met RaeLuna and assisted her in acquiring and naming her new ship, the Raptor. He soon escaped with her when the station was engulfed in an X-Time bubble. ("Avalon Battlefield, Part I")

Back in mid-2377, Seifer and the top vector re-integrated back into the Phoenix-X, where Seifer finally learned to live with his new symbiont. ("Secret Shuttles, Part IV")

Later, Seifer was forced to question his own desire to be loyal to his crew after his actions during a battle with the Ceavon were criticized. But he quickly re-established his loyalty when he risked his life to save the Phoenix-X crew from death when the crew's minds were taken over by Thalia particles. ("Loyalties, Part II")

Sometime later, on the advice and experience of Seifer's time in his "time-loop", the Phoenix-X traveled to Sector 894 Engine Apex Centre with the intentions of a transwarp engine tune-up. While there, Seifer secretly arranged with a man he met previously, named Velum, to purchase an illegal weapon called a Silillian destroyer. When meeting with Velum's dealer, Baetal, Ensign Dan exposed Seifer's illegal transaction, and, when Velum himself showed up, he misunderstood Seifer's intention as trying to expose him. The two dealers were then handed over to operator Hwoarang of the Engine Apex Centre and Captain Daniel punished Seifer for his transgressions by doing his job, by way of exposing Seifer's poor choices, and reorganizing the personnel positions of Kugo and Ensign Dan previously organized by Seifer. ("False Management")

In 2380, Seifer took command of the Phoenix-X for a short period when Section 31 forced him to force Cell off the ship. Section 31 believed the Captain had become too powerful with omni'X ability. But with Seifer's help Cell was able to remain as Captain on board the Phoenix-X. ("Power Levels")

In 2391, he assumed command of the Phoenix-X, when Cell left Starfleet. Despite being in command, he was not promoted to Captain in rank. ("The Needs of the Plenty", "For the World is Worldly and Such")

In 2394, Seifer maintained a rivalry with Captain Terry of the USS Kitana which resulted in the Commander taking control of the Kitana's systems and knocking the Captain out. ("Phoenix Meltdown")

In 2397, a promotion to Captain by Admiral Cloud caused a symbiont imbalance to exemplify and make Seifer go rogue.

He time traveled to 2383 in the runabout USS Iroh and engaged in a series of robberies throughout the Federation, including that of breaking into Starfleet Latinum Storage. He geared his robberies to appear selfish to trick his controlling symbiont, but in reality was amassing cloning technology to create a clone of himself. Seifer was caught by Captain Aeris and jailed.

In 2385, Seifer was on Mars and died of the imbalance five seconds before a Synth was about to stab him. His death added madness to the Synths during their mass attack against the Federation. His symbiont was placed in a package and sent on an unending shipping-spree between the Federation and the Klingon Empire until delivered to the Phoenix-X in 2397, where it was rejoined with the Night clone. ("Transphasic Meltdown", "Partial Recall", Star Trek: Picard)

In 2379, a temporal rift formed in the Narendra system caused by the intersecting other-dimensional Rockono Galaxy. Upon the examination of this rift, Commander Night Seifer was kidnapped and his symbiont tampered with by the highly experimental Gordarions. The Commander was then rescued and returned to the ship, but, unfortunately, due to the quantum-shift effects of the rift combined with the genetic tampering by the Gordarions, the Seifer symbiont within the Commander was somehow given sentience: This sentience led to a mouth, eyes, tiny arms and legs to grow and the symbiont itself to unjoin itself to walk around the ship on its own free will. The Seifer symbiont used its sentience to command dominance over the crew and order them around. With the new perspective, the symbiont expressed contempt for his host body and cared less about returning to the Night host and more about its own desires for command. A quantum shift alteration forced the symbiont back to the way it was and it was returned to the Night host. ("Occurrence, Part I & II")

In 2382, the Phoenix-X was taken over and brought to the mirror universe where the Seifer symbiont was quantum shifted back into sentience. Un-joining, as before, the symbiont dominated James' and Lex's plans to sell the already contained Phoenix-X crew as slaves to the Klingon-Cardassian Alliance. The exchange was to allow him to join the Alliance, but the plans were unfortunately foiled by quick thinking of the Phoenix-X crew. ("Mirrorlyness!")

His time on the Phoenix-X had always been anti-productive. On several occasions, Seifer had been known to deal with black market trades, or had been known to steal technology from other ships. His "bad-guy" actions are said to be caused by the Seifer symbiont's influence, itself, since the Symbiont's life in Lex, previously, was never a law-abiding one. ("Phoenix Restoration", "Departments") 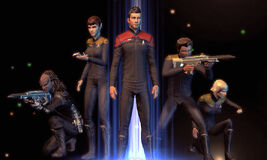 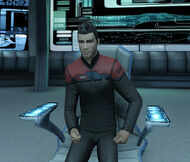 Retrieved from "https://stexpanded.fandom.com/wiki/Night_Seifer?oldid=289747"
Community content is available under CC-BY-SA unless otherwise noted.