Rune Sith was a Starfleet security officer aboard Starbase 001 in 2752, later promoted to Security chief. He was typically accompanied by his friend, an android spider named Zeta, attached to Sith's shoulder. (Star Trek: 001)

Sith was born on Earth, and studied martial arts with his father, a retired Starfleet security officer. After losing a kung fu competition at the age of 18, Sith decided to join Starfleet. Sith attended Starfleet Academy from 2747 to 2750, after which, he served aboard the USS Vitality from 2750 to 2752. (Biography)

Serving aboard the Vitality, he and the ship were forced to withdraw from several sectors due to increasing borders of the Alliance. On the revived Omicron Theta, Sith was part of an away team searching through colony rubble after the planet was attacked by the Alliance. While there, Sith was ambushed by Breen soldiers, nearly out-numbered, until his life was saved by a small android spider named Zeta. After the fight, Zeta and Sith became friends, where Zeta joined Sith in his adventures. (Biography)

After serving aboard the USS Vitality for quite some time, the Vitality had been called in to Utopia Planitia Fleet Yards for major refits. The crew was then relieved for a few months. During this time, Sith transferred to Starbase 001. In 2752, the Vitality was one of the ships destroyed at Utopia Planitia when a bomb went off. ("When It Rains...")

Months later, Sith and some of the crew were knocked into the Nexus when the Nexus ribbon passed through the station. Sith was sent there with an Orb of the Prophets, causing him to lose his memory. ("The Road Not Taken")

During the Federation-Alliance War in which Sith fought, he received an arm and leg replacement. His ship crashed on Omnicron Theta, where new locals took him and repaired his injuries. Sith returned safely, near the end of the war, with a robotic arm and leg, making him faster and more agile. His friend, Zeta, was also altered. (Scorpion's Descent)

After the war, while aboard Starbase 001, Sith was abducted and led to a final showdown with his immortal enemy, the Wraith. There, he reunited with his past love, Julia, and returned with her to the realm of the Prophets. (Scorpion's Descent)

Sith was trained in several forms of martial arts including Tai Chi and 25th century Shaolin. He was able to operate both Federation and Klingon computer systems. (Biography) 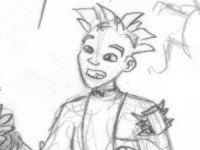 Retrieved from "https://stexpanded.fandom.com/wiki/Rune_Sith_(Lieutenant_commander)?oldid=274141"
Community content is available under CC-BY-SA unless otherwise noted.