Sigon was a Klingon Defense Force officer who commanded the IKS Baetal after his previous ship was severely damaged by a tribble infestation. He made friends with Captain McCary and would typically invite him to celebrations. (Star Trek: Phoenix-X, Star Trek Online: Unofficial Literary Challenge)

Every year, Sigon would partake in the ritual conquering of the planet Raatooras, which included the re-enslaving of its citizens, hunt for an oblivious Takarian Sage and large feast. In 2410, Captain McCary stumbled upon this and was invited to the festivities. Despite discovering everything the Klingons were doing, Sigon persuaded him to eat. ("What Are You Thankful For?")

Later, the IKS Rotog became infested by alternate universe, spaceborne tribble. Sigon and his crew came victim to them, where they would begin a transformation process in which they would all begin to turn into giant tribble. With the help of McCary and his crew, Sigon was able to see the Mother Tribble defeated. Soon after, both Doctors from both ships worked together in finding what they thought was a solution to the transformation problem. For a short time, the crew of the Rotog and USS Tsunami were safe from turning into them, but the Rotog took on too much damage, so Sigon and the crew were transferred to the IKS Baetal. At some point, after, the transformation would return, and the crew completely turned into giant tribble. Since McCary had transformed himself, sooner, by his time on Nibiru, he was able to advise Sigon that going through with the tribble self-pregnancy would run the spaceborne tribble's vemon's course and they would turn back to normal. Sigon and his crew proceeded to have their pregnancies, but Sigon found he had a miscarriage. Shortly after everyone turned back to normal, the tribble spawns were ejected into space, ("The Officer Exchange", "Nibiru", "Apparitions")

Back to normal, Sigon and the crew planned a blood wine celebration aboard the Baetal, and Sigon invited McCary and the crew of the Tsunami. At this point, Sigon began seeing visions of tribble, causing him to go hunting for them throughout his ship. At what he thought was a group of tribble, instead of a group of targ, he attacked and murdered as viciously as possible, depleting the crew's targ supply. After he admitted that there was still tribble venom within him, he, unintentionally launched a ship-to-ship attack at the Tsunami, believing them to be the Mother Tribble. The Tsunami was near-destroyed, forcing the Starfleet crew to evacuate their ship. ("Apparitions")

Sigon encountered the being known as Qu when Qu and several other Q were accidentally and temporarily pushed out of the Q Continuum and into the mortal realm. Appearing on the Baetal, Sigon noticed that they were naked and refuted their practice and presence. Qu then convinced Sigon otherwise and, soon after, returned to the Continuum. ("How the Mighty Have Fallen")

Not long after, when Sigon and his crew were holding a celebration in the messhall, Menchez snuck aboard and took over the ship. Being too drunk, Sigon opted out of attempting to fight the other Captain to the death and assisted in Mechez tracking the Kazon-Rokka who had captured the IKS B'Cnah. Sigon opposed the idea that Menchez would give his life and when Menchez transported over to his old ship, Sigon followed and saved the other Captain from death. When the Kazon were defeated, Menchez took his ship home and Sigon feared he did the dishonorable thing by saving him. ("Life or Death") 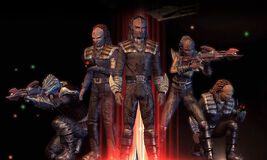 Retrieved from "https://stexpanded.fandom.com/wiki/Sigon?oldid=282647"
Community content is available under CC-BY-SA unless otherwise noted.