Star Trek: Eagle (STE) is a fan film series that follows the exploits of the USS Eagle during the 23rd century.

The series covers the adventures of Captain Zach Banner and crew as they encounter many old foes from classic Trek such as the mirror universe, Orions, Gorn, the First Federation, and Ekosians.

The series began in 2009 and is based out of Minnesota. Several guest stars do appear such as Vic Mignogna of Star Trek Continues.

There are also several comics and other such spin-offs martial. This includes a prequel comic series about Captain Banner while he was a first officer on the USS Bismarck, a Machinima comic using Star Trek Online and Star Trek: Legacy telling a story of the crew during a war with the Klingons, and a short novel story about the ship and crew's Kelvin timeline counter-parts. 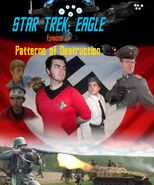