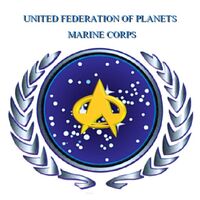 The Starfleet Federation Marine Corps origins date back 22nd century. Originally known as Military Assault Command Operations, they operated well into the late 23rd century. Opponents to the militarization of Starfleet was counter productive, and the Military Assault Command Operations was regulated to protecting installations, and colonies that were threatened by forces that were enemies of the Federation.

After the Khitomer Accords, the Federation Council began to dismantle the Military Assault Command Operations, and hand control over to Starfleet Command.

In 2311, no less then 123 colonies petitioned the Federation Council to station a ground base unit on their colonies, or they would abandon them all. Pushed into a decision, the Federation Marine Corps went active that year. Lack of equipment, and proper Training facilities forced Starfleet Academy to begin a separate Marine training program. By 2320, the FMC had dictated construction on bases, and equipment diverting resources that would have gone into starship construction.

By 2340, increased local confrontation with neutral and enemy species in outlying colonies forced the Federation's hand and caused it to create the Starfleet Federation Marine Corps. An academy was constructed in Galveston Texas, and opened in 2343. Their initial duty uniforms would eventually be the design on which Starfleet would base the Federation Uniforms of 2373.

In 2347, small skirmishes between the Federation, and Cardassians would be the first battles for the SFMC. The Federation-Cardassian War would not be resolved until the cease fire of 2363. Among the demands was the demilitarization of several key colonies along the Federation-Cardassian border. The SFMC began a program to include fighter squadrons as well as create marine assault ships, but by 2370, the Federation Council ruled against it, as it would require militarizing Starfleet. In 2372, the Second Federation-Klingon War began, and SFMC found it self outnumbered, and without the necessary equipment to engage a long battle. Lieutenant Commander Deragon Lucifel would come to the rescue, as his introduction of the Terrapin ground assault vehicle, as well as the Vigilant class starship gave the SFMC tools it would need in the Dominion War.

By 2378 the obvious needs for a stronger military presence was made obvious with the return of the USS Voyager. As Starfleet explored the Delta Quadrant, and the Gamma Quadrant, as installations were built, Marines were stationed there, as well as on Starships.{Star Trek: Generation Fleet)

Retrieved from "https://stexpanded.fandom.com/wiki/Starfleet_Federation_Marine_Corps?oldid=281560"
Community content is available under CC-BY-SA unless otherwise noted.