The USS Prometheus (NX-59650/NX-74913) was a late 24th century Starfleet tactical cruiser, prototype of the Prometheus class, considered the state-of-the-art in starship tactical design when it launched in early 2374. (VOY: "Message in a Bottle").

Romulans briefly hijacked the Prometheus during its shakedown cruise, in 2374; a plot foiled with help from USS Voyager's EMH. (VOY: "Message in a Bottle").

Prometheus, along with other ships, escorted Voyager's return to Earth in 2378. (VOY: "Endgame")

The Prometheus was assigned to Captain Robert Styles in 2373 for a six month shakedown cruise. Both Styles and his Chief Engineer, Lieutenant Commander Susana Flores, were said to be pleased with the ship's performance to the point where such minor issues as getting the correct registry number painted on the ship's hull were included in the Engineer's reports. (Star Trek: The Adventures of Argus: "Messages From Home")

In 2376, the Prometheus participated in defense of Earth from the Vendoth during the Battle of Sol. (Star Trek: Unity (crossover): "United We Stand - Together")

Lei Sanchez and Ensign Seanna Jackie stowed away aboard the Prometheus when it was docked at Deep Space 9, in 2379, to escape Starfleet security. (Star Trek: Reloaded: Chapter 3) The ship was on a mission to meet with the Jem'Hadar battle cruiser Neikada, by Jem'Hadar request. At the rendezvous, the Jem'Hadar expressed recent political concerns, but were interrupted when Jackie faked a ship malfunction that required the entire crew to evacuate from the top section of the Prometheus to the lower sections. She and Lei then detached and hijacked the top 1/3rd of the Prometheus, where, after a fire-fight with the Neikada, they jumped warp to a Borg facility. (Chapter 4)

The Prometheus was at one point part of Task Group 15-2. (DeltaFleet.org)

In 2385, the Prometheus was part of Task Group 1-2 under the command of Captain Jeremiah Stone. (Starfleet Command (RPG)) 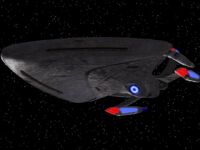 Retrieved from "https://stexpanded.fandom.com/wiki/USS_Prometheus_(prototype)?oldid=284174"
Community content is available under CC-BY-SA unless otherwise noted.