Start a Wiki
The USS Ragnarok was a Pathfinder-class Federation starship modified with Discovery-class pylons, in the early 25th century. (Star Trek: Phoenix-X)

Shortly after, the senior staff met in the briefing room for their first meeting, but were put into temporary danger after a Verathan sub-ossemite statue was unintentionally activated. ("Department Heads") The Ragnarok later investigated a Deferi colony world when it came under the harassment of the Breen warship Leinstien. ("Neutrality for Beginners")

When the Orion corvette OSS Hackkett, under the command of Ginyo, opened fire upon and demanded bounty from the Ragnarok, the presence of the electronic version of fizzbin on the Ragnarok was enough to drive Ginyo away. ("The Imposter")

Soon after, the Ragnarok encountered a Zanthi nebula, causing the entire crew to become infatuated with each other. ("L'amour est Parmi les Étoiles")

When the CSS Cortisgor threatened Carpi, the Ragnarok attempted to intervene, but both vessels were soon visited by alternate future versions of each Captain warning against battle due to a possible devastating future for everyone. Both ships then agreed to back off. ("Enmity")

Picking up a subspace ad for Quark's bar, the Ragnarok tracked its source to a planet inhabited by a Thasian head named Alazard where the crew bombarded the head with simulated tachyons. Doing so then relieved it and released the planet's Bajoran colony from hiding. ("Lost to Time")

Later, the Ragnaork received a hail from Kuumaarke. The Ragnarok was also known to try to impress the Klingons, which served unsuccessful with Captain Sigon. ("Perpetual Ragnarok": To Boldly Crush & The Starship Hustle)

From Starbase 157, the Ragnarok detected a Starfleet distress call from the Demon class planet Kunara Prime, in the Kunara System, where they discovered the troubled, alternate reality Mayflower-type 23rd century starship USS Dynex. There, the crew assisted its Captain Allana Montoyez against attacking Tholian orb weavers and then sent the alternate Federation ship back through a spatial anomaly to their own reality. ("From Hell's Heart...")

Sometime before 2409, the yet unjoined-Oroku was unwittingly placed into a simulation by his future-self where he was in command of the Ragnarok. ("First Contact Day") 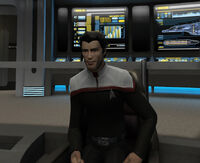 Retrieved from "https://stexpanded.fandom.com/wiki/USS_Ragnarok?oldid=288239"
Community content is available under CC-BY-SA unless otherwise noted.