The USS Zephyra was a Sovereign-class Federation starship in the late 24th and 25th century, in lead of Task Force Zeta, home based at Starbase 78. The ship was commanded by Captain Aeris and was known to have a mostly female-dominated crew compliment. (Star Trek: Phoenix-X)

The Zephyra was launched in 2390 after a small group of divergent-Hirogen began attacking the Federation. Several vessels were destroyed in their surprise-wake, including the USS Xena, Captain Aeris' variant Galaxy-class starship. After its destruction, the Zephyra was launched and it and its task force assisted the Phoenix-X in taking down the Hirogen threat. ("Into Harshness")

Following into the 25th century, the Zephyra presumably encountered the same molecular reversion field that Andrea Reynolds and several others did, in "Delta Recruit", sometime before 2409, the crew lost their memories and re-took Starfleet Academy as to explain why they are still active in the 25th century. This event also syncs up the ship with the gameplay of Star Trek Online. After the Academy and several events, the ship was re-launched under the command of a re-ranked Captain Aeris.

Sometime in 2409, the Zephyra and USS Kitana were abducted by an Undine scientist and brought into fluidic space so the crews could be experimented on. Sometime after the Zephyra escaped, returning to normal space, the ship was hijacked by the Tal Shiar, and the crew subjected to intense interrogations. (Earth Spacedock)

In 2410, before being sent into a gender-bent universe, Kayl from the Phoenix-X commented on how much more exciting missions were for Aeris on the Zephyra. ("The New Frontier, Part II")

In the same year, when the Phoenix-X and IKS B'Cnah endured a severe undead-like viral infection from Calibus VII, the Zephyra became responsible for discovering and curing both vessels of the atrocity. ("STO Halloween")

While near Earth Spacedock, Lieutenant Winry installed a highly experimental trans-dimensional scanning device, aboard the Zephyra, that interacted the ship with Spacedock's hidden anti-Undine devices, which were being manipulated by an Undine scientist. The result was that the Zephyra was transported into fluidic space, where Aeris changed its course to an unknown biobase that she was familiar with. There, the Zephyra was locked down by giant tentacles that also spread a green substance along its hull. Aeris expected the ship would not "fair too well" after the secretions. Upon escape, the Zephyra was barely able to function, but succeeded in traversing an open portal back to normal space. (Earth Spacedock: Pages 12, 15-16, 20-24)

Aeris would later switch to be in command of the USS Viracocha, with a new crew, and participate in defending against a Borg cube attack at Earth. (Pages 60-61) 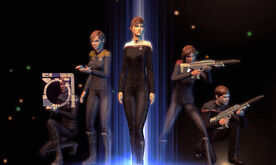 Retrieved from "https://stexpanded.fandom.com/wiki/USS_Zephyra?oldid=295034"
Community content is available under CC-BY-SA unless otherwise noted.