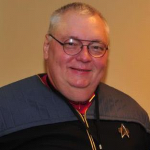 I am Admhawk, the contributor and primary author of the Fan Fiction Project - Star Trek: Black Hawk. I share my real name with the Commanding Officer of the USS Black Hawk.

I am in fact a long-time Star Trek Fan, however I did not see the first-run episodes until 1967. Why? My father, a member of the US Air Force, was stationed at Bitburg Air Force Base in Germany and my first viewing of the series was a year after it premiered on NBC, over the Armed Forces Radio and Television Service TV station out of Spangdahlm AFB, Germany. I did not see the entire third season until many years later when Star Trek went to reruns, after we returned to the US in the Fall of 1969.

I have been in Trekdom (organized Star Trek Fandom) since I organized the Ken Rock Space Science Club out of a community center in southwest Rockford, Illinois in 1975. It faded after a few years. It was 20 years later before I would re-enter Trekdom when I joined STARFLEET: The International Star Trek Fan Association, Inc.(which gives honorary fictional (emphasis on fictional) rank & positions on each of their chapters/starships) while I lived in Henderson, Tennessee. My family and I joined the nearest chapter, the USS Alacrity (NCC-1881) and a few months later we organize a chapter which would become the USS Shiloh (NCC-74683). We actually did public service work out of Shiloh National Military Park & Cemetery, cleaning monuments and gravestones of the honored war dead.

In 1997 we moved the chapter to Rockford, Illinois and in 1999 renamed it the USS Black Hawk (NCC-74683). A year later we changed the class of our fictional starship from Intrepid to Sovereign Class and STARFLEET Technical Services changed our NCC number to 75004. We had picked the Intrepid class to reflect the population of the area we lived in at the time as well as the name, whose namesake was only 30 mile (as the crow flies). It was decided that we would change the name and class to reflect the population of the area the chapter moved to. The area we live in is also known as the Black Hawk Valley, the area which where the Black Hawk War took place, so this was an easy choice for a name. To celebrate our 20th Anniversary in 2015 we added '-A' to our NCC prefix, to become the USS Black Hawk, NCC-75004-A.

The Black Hawk, as well as Starbase Rockford, also belong to the Cha'ouw Empire, a Pseudo-Klingon club headquartered near of Myrtle Beach, South Carolina.

I hold the honorary fictional ranks of Admiral in STARFLEET and the Cha'ouw Empire.

I have held several positions within STARFLEET, including founding Director of the STARFLEET Diplomatic Corps, Deputy STARFLEET Historian, Region 12 Illinois Sector Advocate, Region 12 Historian SFMC Historian and STARFLEET Historian. I was the compiler, compositor & Editor of the Starfleet History Website until my retirement in 2014. A brief version of the history appeared in Communiqué 100, which is an issue of the official newsletter of STARFLEET. I also served as the Communications Director (1996) and Vice Chair & Chair of the General Assembly of the International Fandom Council in 1997.

I have been writing stories (mostly unpublished) about the Star Trek universe since 1976 when I was involved with the Ken Rock Star Trek Space Science Club while I was a high school student. It was not until I started the website for the Shiloh Star Trek fan club that I adopted some of these stories for that universe.

On April 5, 2009, I was elected for my first two-year term as the 12th Region Twelve Coordinator, serving on the Admiralty Board (Board of Directors) of STARFLEET, representing a five-state region consisting of Arkansas, Illinois, Kansas, Missouri and Oklahoma. I was re-elected to a second and third term and retired after my ended my third term on April 30, 2015.

It was my honor and privilege to be the Chairman and primary Host for the 2014 STARFLEET International Conference, held at the Clock Tower Resort & Visitor's Center in Rockford, Illinois from August 8-10, 2014.

I am honored to have been named the December 2007 Contributor of the Month for the Star Trek Expanded Universe Wiki. Appreciate it and thank you. .

Retrieved from "https://stexpanded.fandom.com/wiki/User:Admhawk?oldid=279424"
Community content is available under CC-BY-SA unless otherwise noted.