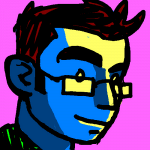 Leckford is a pseudonym for an Australian-born comics maker resident in Oxford, England.

I feel the need to attempt some wiki cleanup in exchange for indulging myself by adding TOSS to the wiki. :-) Please be forgiving of my gaffes.

I'm flattered to have seen my drawings on the front page.

Space ship design!
Add a photo to this gallery

Hart's Rules says ranks and titles are lower case except when used as a name-prefix, as in 'Bilbo Baggins was promoted to lieutenant commander; Elrond is chief medical officer' versus 'I just had tea with Lieutenant Commander Baggins'. When the title is the name (when only one person can hold the title, like the Queen) then I think I'd use caps (President of the Federation, when used to name a person).

I realize it is a little too late to even suggest this, but if I were God-King of Style Matters I would have us use the present tense for entries rather than the past tense.

Bilbo Baggins is a tactical officer serving in Starfleet in the midle and late 23rd century.
…
Baggins joins Starfleet Academy in 2225 and graduates with rank lieutenant junior grade in 2229. (Star Trek: Silmarillion "Reminiscences XIII").
He is assigned to Starbase 13, serving as chief librarian until is is shut down in 2271. During that time he meets Stephen the Vulcan. (Tales of Starbase 13)
In 2300 he is retired and living on a planet the Briar Patch. (Star Trek: Briar Patch)

It is a conventional style for précis and historical summaries, and I think it would have some benefits:

Obviously STEUD uses American spelling for consistency and I will try to stick to that. If I use the other spelling occasionally by mistake, please forgive me.

Retrieved from "https://stexpanded.fandom.com/wiki/User:Leckford?oldid=139916"
Community content is available under CC-BY-SA unless otherwise noted.