Luis Panadero Guardeño called "ZardoZ" (these film fascinate me) is my name. I really love Star Trek and other Sci-Fi stuff.. hehe... I collaborated which Star Trek Origins fanfilm, working in the CGI team, and adding some ideas to STO. In addition I helped which ship models for "Hispatrek II" a Spanish Star Trek fan film.

Sorry for my English (some guy compared my English which "Bizzaro" ... I need a lot of improvement.

Galery of Images that I uploadEdit 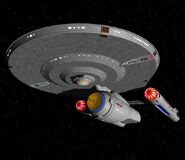 Other image of USS Yorktown NX-1531

Retrieved from "https://stexpanded.fandom.com/wiki/User:ZardoZ?oldid=210455"
Community content is available under CC-BY-SA unless otherwise noted.