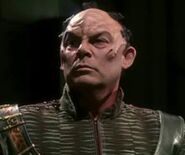 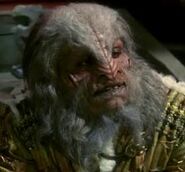 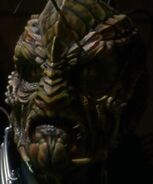 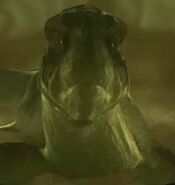 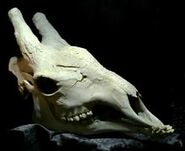 Despite the apparent physical differences, the Xindi species are extremely similar on a genetic level, sharing over 99.5% of their DNA. From a physical standpoint, all six species shared distinctive ridges on their cheekbones and foreheads. (ENT: "The Xindi")

Degra didn't trust Captain Archer, but couldn't let go of the possibility that he was telling the truth. In early 2154, after the Xindi Council ordered the Reptilians to cease their attack on Enterprise, Degra had the Aquatics, the only ones he could trust, transport Archer back to Enterprise. After he briefly regained consciousness aboard their vessel, he was put in an escape pod and left adrift for Enterprise to find.

In the Star Trek: Prometheus continuity after locating and settling on the third planet in system SNC 461206 in Sector 441 system with the assistance of the Federation and establishing it as their new homeworld. The planet, known in Federation databases before the colonization as SNC 461206-III, was renamed New Xindus by the Xindi Council.

In the Star Trek: Prometheus continuity, the Xindi Council unanimously voted to petitioned the United Federation of Planets for membership on behalf of their new homeworld and their colonies. Federation membership was granted to all five Xindi species in 2311.

In the early 2330s, a single colony of the long thought extinct Xindi-Avains was discovered on an isolated planetoid in the former Delphic Expanse. Following the re-establishment of contact with their Xindi cousins in the Federation, the Avians petitioned the Federation for membership, which was granted, and re-located their colony to New Xindus.

Sometime before 2409, the Xindi made the petition to enter the Federation, and by 2409 many Xindi are serving in Starfleet, including the Security Officer of the USS Constance, Lieutenant Ivark.

During the Federation Civil War , the Xindi homeworld of New Xindus was the site of a major conflict based almost completely on the ground. After the end of the War, New Xindus was declared a Safe Zone, where no faction could build a base. The Xindi remained part of the Federation, however.

Until the mid-22nd century, at least, the Xindi nearly worshiped the Guardians, thinking of them as saviors. Xindi children were taught to revere and give thanks to them each night. It was considered a grave offense to doubt or question a Guardian. (ENT: "The Council")